Scott and Jenn Miedema and family  Leadership Training with Young Life Latin America/Caribbean What we do :   The Miedema family lives in Jarabacoa, Dominican Republic.  From there Scott serves as the Training Director for Young Life in Latin America and the Caribbean, while Jenn is support staff for the expat missionaries throughout the division.         Young Life currently has ministry in 26 countries in the LAC division. In those countries we are working with over 200 national staff, 80 student staff on scholarships with the YL Developing Global Leaders scholarship program and over 1,600 volunteer leaders connected to about 90,000 adolescents.     What is Young Life?  Young Life aims to be truly incarnational ministry with adolescents.  Leaders  GO where teenagers are- in their neighborhoods or schools- and build significant friendships with them in order to ‘ earn the right to be heard’ . They share Jesus through actions, relationship, fun, and adventure with the
Post a Comment
Read more 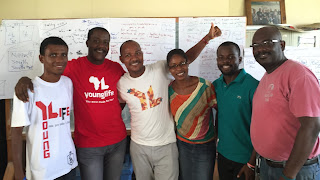 Equipping Leaders          There are very few places in the world more broken than Haiti . It’s the poorest country in the Western Hemisphere, the Global Hunger Index ranks it as one of the most undernourished countries in the world, and it’s considered one of the most corrupt countries by all accounts as well. Our Haitian team that went to Kenya       Some of these problems have only worsened despite the massive economic aid to Haiti following the devastating earthquake of January 2010. For example, the Red Cross raised over 500 million dollars to help Haiti and yet NPR says this resulted in “a string of poorly managed projects, questionable spending and dubious claims of success. ” Many other aid attempts didn’t fare much better. Part of the reason many believe the aid has helped so little is an inability or unwillingness by organizations to equip and involve Haitians as part of the solution. This is also part of why I’m so excited about Young Life in Haiti .       Youn
Post a Comment
Read more

When you picture a missionary, what do they look like? Quite often in response to that question I think we tend to picture missionaries as American ( or at least white people ). But it's exciting to realize that many missionaries to foreign countries are NOT from the US, not white, and that number is growing every day. Check out the photo above and you'll see a bunch of missionaries in Central America ( and one white guy ). At the end of September we held two key Young Life trainings in Nicaragua . The first was with seven Nicaraguans who are now ministering with Young Life in Honduras , El Salvador and Guatemala. These are missionaries who have left home and family to live in foreign lands and build up teams to minister to teens and they are a remarkable group. We also held a training for 35 YL Area Directors from 7 different countries , who really are leading lots of folks to be missionaries into the world of teenagers in their own neighborhoods. Both of these times
Post a Comment
Read more 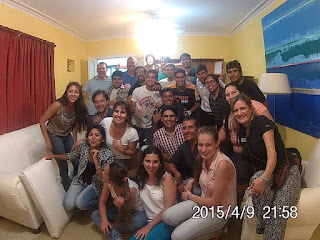 A Mission Community What is Young Life? An early mission statement of Young Life in part said this: ‘ Young Life is a mission community of Christ-centered people committed to reaching adolescent youth with the Gospel.’   The official statement has changed, but the focus is still true- YL done well depends on a community of believers on a mission together reaching out to teenagers. Being a true mission community means much more than working together, it means living life together with a purpose. I saw this being lived out very well in Argentina this spring. Carolina Pi and her husband Eduardo have done a tremendous job of bringing together a community of people who live life together and impact teens for Christ. They started with a prayer and a vision and with one club in their town of Corrientes and as people felt the impact of being part of that community the movement grew.         Jonny is a great example of the impact this can have. Jonny was a college student in Corrientes whe
Post a Comment
Read more
More posts

Scott Miedema
Scott and Jenn and their family live in the Dominican Republic and serve with Young Life. Scott is the Divisional Training Coordinator for Young Life in Latin America and the Caribbean and Jenn serves as a mentor and coach to the YL missionaries in the same division. They have the privilege of working to encourage and support leaders from 25 different countries who are impacting thousands of teens each year for Christ.